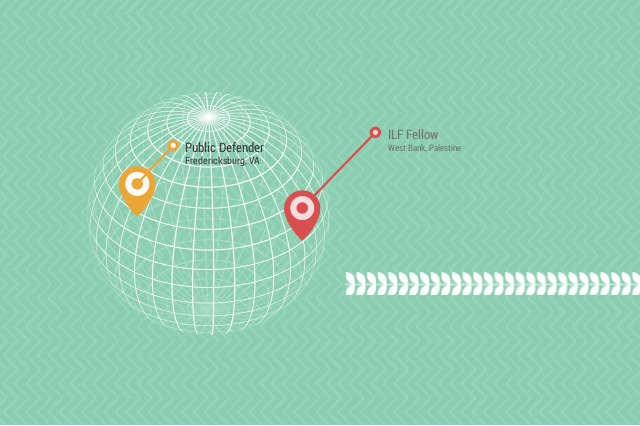 Back in 2011, I attended a pre-law conference run by PLEN, a women’s leadership non-profit based in D.C., and had the opportunity to listen to a number of highly accomplished female lawyers and law students. A few years later, the person I remember most vividly is Shama Farooq, a Fredericksburg public defender whose passion and genuine empathy for her clients impressed and resonated with me. Here she speaks to 7Sage about the learning curve, warfare-like litigation, and her experiences in Palestine with the International Legal Foundation.

What is your day-to-day schedule?

You have this routine of court, jail, office.

A normal schedule for a public defender would be to head to court in the morning if you have an assigned docket or a case. Then I would go back to the office, where I have some managerial duties--advising other attorneys on their cases for example. Usually I go to the jail at least once. Then I’m back in the office, making phone calls to clients, speaking with investigators, visiting crime scenes, and looking up case law. You have this routine of court, jail, office.

What is the learning curve like for a new public defender?

The legal learning curve is definitely going to be very steep.

The legal learning curve is definitely going to be very steep, everything from learning to recognize the elements of a crime to listening to a story and within two minutes, being able to understand what the problems are for you and the other side. The first nine months as a public defender, you learn a ton, and afterwards, you learn the complexities.

Can you talk about the adversarial side of being a public defender?

It is like warfare but civilized warfare. You’re using the law and procedure practices as your weapons.

Being inside the courtroom – you have to recognize for yourself if you are the sort of person who can deal with the tension of being inside the courtroom because you are not really on your best social behavior [in this setting]. It is like warfare but civilized warfare. You’re using the law and procedure practices as your weapons. At the same time, you have to be professional, you have to be civil, and you have to be courteous. If the other side needs to break, for a legitimate reason, and it doesn’t hurt your client, you should give it to them. Those courtesies will come back to you. So on one side, you have to have this thick skin but you also have to remain a human being. Be kind and generous as long as it doesn’t hurt your clients.

What was a memorable case you worked on?

The experience really reaffirmed my faith that judges understand that they are human beings who make mistakes and that when presenting a reasonable legal argument, you can convince a judge to change his or her mind.

I had one very recently. I had a client who is a drug addict, and by the time she got arrested, she was on her way to recognizing that it’s a disease and to dealing with it. But the law is a bit tough on it. It only gives you a few options for avoiding a felony conviction for example. We wanted to use some of those options for her. But the judge was a fairly new judge, wasn’t being convinced, and was using something on her record as a hindrance. He wasn’t giving me a chance to explain when my client really deserved another chance. It was a devastating blow. But we filed a motion after her conviction and put in all the laws I knew he wasn’t aware of. To his credit, he let me argue again in court and reversed himself. He acknowledged that he was wrong. The experience really reaffirmed my faith that judges understand that they are human beings who make mistakes and that when presenting a reasonable legal argument, you can convince a judge to change his or her mind. That’s an amazing thing.

What advice do you have for students interested in public defender work?

It’s very rewarding--being an advocate for someone else and putting your heart in it.

It’s one of those jobs that you are going to love. It’s going to be really tough but you are going to love it because you have an impact on people’s lives every single day. You are upholding a basic human right and the Constitution in a way very few people get to do. It’s very rewarding--being an advocate for someone else and putting your heart in it.

From the very beginning, take as many basic criminal law courses. If you can do internships in public defender offices, there’s nothing better you can do. Everything you learn in your 1L year, you can put into use immediately. You can also seek out opportunities in a criminal justice clinic, which most law schools have, or find people in the local legal community to shadow, even if it’s only for a few hours.

You mentioned that you were interested in international affairs in undergrad. Is that something you miss?

You’d be surprised that many of the same principles of protection apply for criminal defendants in Palestine as in the U.S.

No, actually, I took a three-month fellowship last year in the Palestinian West Bank where I was training Palestinian defense attorneys with the International Legal Foundation, an NGO based in New York that helps set up attorneys in post-conflict societies. In Palestine, I was doing the exact same work as I do here, and I was training attorneys to analyze the law, conduct investigations, and how to argue. You’d be surprised that many of the same principles of protection apply for criminal defendants [in Palestine as in the U.S.]. So many constitutions have similar provisions for the right to counsel, having affidavits, and preventing the mistreatment of detainees. Pretty much every major democracy has those.