Example
There is a bag of 5 marbles; 3 blue and 2 red. Jane picks one marble out of the bag, looks at its color, sets it to the side (and does not return it to the bag) and picks another marble. What is the probability that she picks two blue marbles?

In this case, it isn’t clear how to apply our earlier rules. Remember our first rule:

Probability of Equally Likely Outcomes:
If you have n possible outcomes, all of which are equally likely, then the probability of any particular outcome occurring is 1/n.

How do we apply this rule to Jane’s situation? How many possible outcomes do we have?

This is where combinatorics comes in: it will allow us to determine how many possible outcomes we have. Now the word “combinatorics” is a little intimidating, but it’s just a fancy word for the mathematics of counting. In this case, we will use it to count the number of possible outcomes for Jane.

Let’s try to list out all the possible pairs of marbles that Jane could pick. To do this, let’s number our blue marbles 1 through 3, and number our red marbles 4 through 5. Now, Jane has to pick two different marbles. So, in other words, Jane ends up with some pair of marbles from the following list: 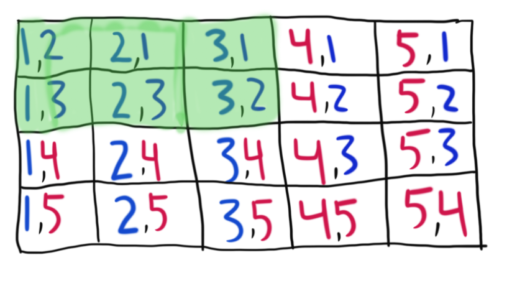 Adding up these outcomes, we get 6/20 = 3/10. So that’s the likelihood of Jane picking two blue marbles.

In general, it will not be practical to make our table of possibilities and add things up. For if Jane had a bag of 10 marbles, we would have had 90 possible outcomes (10 choices for the first marble multiplied by 9 choices for the second). So, we introduce the following rule:

Rule for Permutations
Suppose we have n objects that we want to fill k spots where k ≤ n. Then, the number of possible ways ("permutations") to do this is:

, which matches our previous answer.

Question 1
Suppose you have three friends: Anne, Beth, and Charles. How many ways can they form a three-person line?

Solution 1
Following our rule, we want to fit three friends into three places. Thus, there are

ways to do this.

Question 2
Mark is trying to descramble a series of letters: AQCFXDE. How many possible five-letter combinations can be formed from those letters?

Solution 2
Following our rule, we want to fit seven letters into five places. Thus, there are

ways to do this.

Question 3
Jane is drawing four cards from a standard 52-card deck. What is the probability that she first draws the King of Hearts, and then the Ace of Spaces, and then the Jack of Clubs, and finally the Three of Hearts?

ways to do so. Thus, the odds are