Some GRE questions ask about the likelihoods of different events. For example:

In this series, we cover the strategies you need for probability questions on the GRE.

Before continuing, you should know that probability questions make up only about 5% of all math questions on the GRE. That totals to about 2 questions per test. So if you are weak in other areas that appear more frequently (e.g. algebra, fractions/ratios, reading graphs), it might be wiser to look at those topics first and return here later.

Sometimes, we are not sure what will happen. It may rain tomorrow or not. I may win the lottery or lose. Federer may win Wimbledon again, or not. Probability is a way to handle this uncertainty. Even if we cannot know exactly what will happen, we can at least determine how likely the different possibilities are. So, if I roll a fair die, I can't know if it will land on 6 or not. But I know that it is more likely to land on an even number than to land on 6 specifically.

Talk about probability is commonplace. We might say it's "pretty likely" to rain later today, or that some team has "no chance" of making it to the playoffs. The mathematical theory of probability gives us a way to make that kind of talk precise, by turning it into formulas and numbers.

Probability begins with the idea of an experiment:

Definition: An experiment is an action that, when performed, leads to exactly one of many possible outcomes.

All sorts of things can be experiments. If I don't study for the final, that is an experiment; it could lead to my acing the class (unlikely), barely passing (more likely), or failing (very likely). In the land of GRE problems, standard experiments include things like flipping a coin (which either leads to the outcome of heads or the outcome of tails), rolling a die (which leads to some number 1 through 6), or picking a winner for a raffle (where the "outcome," or in other words the winner, could be anyone who bought a ticket). 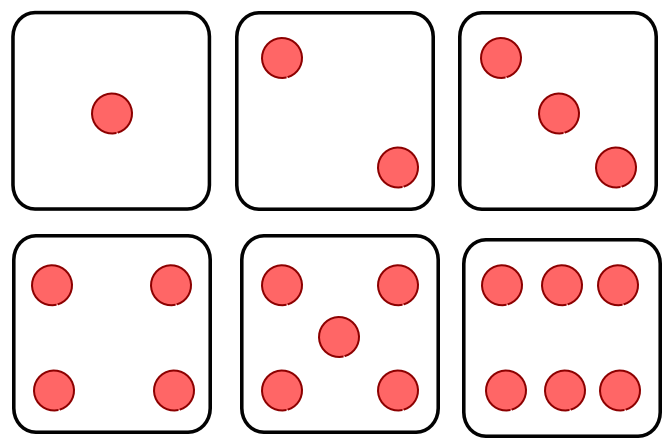 And there are lots of questions we could ask about rolling a dice. For example: am I more likely to get an even number or an odd number? What are the odds of getting a prime number? To answer these questions, we need the idea of an event:

Definition: An event is a set of some (or none, or all) of our experiment's outcomes.

Here are some examples of events:

Note that events do not need to be possible; we can also consider events that simply will not occur:

Now we are ready to get at the heart of probability: the whole point of probability is to figure out what the likelihoods of different events are. These GRE questions will give you some setup and some event, and ask you to find the probability of that event. And the rest of this series will be devoted to doing exactly that -- figuring out those likelihoods -- across a series of increasingly complicated contexts.

And here are some practice questions to test your understanding of the above.

Question 1
I roll a 21-sided die. How many outcomes are there?

Solution 1
There are 21 outcomes; each of the 21 sides of the die corresponds to a different outcomes. (Within the land of GRE problems, we assume things like the die never lands on a corner, teetering between two numbers, and that no one catches our die midair, and so on).

Question 2
Give an example of an experiment that was not discussed above.

Solution 2
Many examples would work; here is one: eating days-old leftover food. The possible outcomes are: you get sick, or you do not.

Solution 3
No. Recall that an experiment is an action which leads to exactly one of several possible outcomes. But it is possible to roll a die and get a 6 (one of the outcomes I list) and get an even number (another outcome I list). After all, 6 is even! So this is an improper listing of outcomes for our experiment.

Next Article: Some Basic Facts About Probability