In this post, we will talk about how to solve a system of linear equations via the method of elimination. Now, you will not need to know both this method and the method of substitution that we discuss in the next post. You do need to be able to solve a system of linear equations, but either method suffices for that purpose. However, for some problems, one or the other method may be easier. So if you have the time, it is worth learning both.

Now suppose we have a system of equations as follows:

We could try to solve this system by guessing values of

, and plugging them in to see if they work. But that would take a long time. Instead, note that if we subtract the second equation from the first, we get:

Or, in other words,

Now that we have found the value of

, we can plug it back in to find the value of

So our solution is

In general, the strategy for solving equations by elimination is to try and get some variables to cancel each other out. We ultimately want one line of the equation to have just one variable in it, for then it is easy to calculate the value of that variable. Once we have that value, we simply plug it back into an earlier equation to get the value of the remaining variable(s).

Let’s look at another example:

Here, it is not useful to simply subtract the second equation from the first. Doing so yields:

which is no more helpful than what we started with.

Instead, we need to make a decision: do we want to eliminate

? It does not matter too much which one you choose (at most you can save yourself a few lines of arithmetic). Let’s say we want to eliminate

. Then, we need to manipulate our equations so that the

variable will be eliminated. We see that in our second equation,

has a coefficient of

but in the first equation,

only has a coefficient of 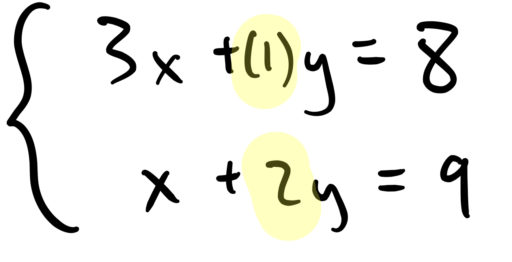 Subtracting these equations, then, will get us an equation that includes

’s to cancel out, we need

to have the same coefficient in both equations. So let’s multiply the first equation by

. (We could have also divided the second equation by 2, but fractions are more annoying to work with). Then, we get

And now, we can subtract the second equation from the first to get:

Plugging this back into one of our initial equations, we get:

So our solution is

In general, elimination problems will look like the following:

are constants. Let’s lay out the steps for using the method of elimination in general:

For our example, suppose we want to eliminate

To do that here, we multiply the first equation by

(The fact that we chose to manipulate the first equation is unimportant. We could have instead multiplied the second equation by

to get similar results.)

And while this looks rather complicated, recall that

are all just constants. So finding the value of

is now just a matter of plugging in some numbers into a calculator.

Suppose we want to eliminate the variable

. Then, we multiply our equations by constants so that

will have the same coefficient in every equation. Since we want to avoid working with fractions, let’s try to make

have the coefficient of 6 in every equation. Then, we multiply the first equation by

Now, we need to cancel out the

’s. How do we do this? Now, as before, there are many ways to cancel out the

And we can solve this using the normal method of elimination discussed earlier.

Like any mathematical ability, really becoming proficient with the method of elimination requires practice. Here are some problems to practice on.

Solve the following systems of equations using the method of elimination