In this post, we’ll define the mean, median, and mode. Along the way, we’ll work through an example of how to find each of them. We’ll also talk about why the median is responds less to outliers than the mean does, a fact which can sometimes be crucial in solving a GRE problem.

The mean (or average) of a variable is found by adding up all of the values of that variable and then dividing by the number of observations. So to go back to our lemonade example:

To find the mean, we simply add up all the values for “Lemonades Sold” and then divide by the total number of observations. Thus, we get:

Now, finding the median is a little trickier. Imagine lining up all of the values for your variable from least to greatest. Then, the median is the one in the middle. So for example, if we have the data:

We order it from least to greatest to get:

And then we pick the middle value, namely

Sometimes, if there is a long string of values, it will be hard to see which value is the middle one. So take the data:

We order it from least to greatest:

And then we simply cross off the numbers at the end, both the left-most and right-most observation, to get:

And thus the median is 3.

Sometimes we will have an even number of observations. So suppose we have the data:

Crossing through the numbers on the end, we get:

But now, it seems, we are stuck. For the median is a single number - not two numbers! And yet if we cross out any more, we will eliminate all of our numbers.

In these cases, we say that the median is the average of the middle two numbers. Thus, the median in the above case is

To find the median, we begin by ordering our values from least to greatest:

And we see that the middle value is

so that is our median.

Finally, the mode is the value that occurs most often. So, if you have the data:

Then the mode is

Now, a set of numbers can have more than one mode, as in this example:

occur three times (and no other number occurs three or more times), they are both modes.

Often, to find the mode it can help to put the numbers in ascending order (so you can see how often certain values are repeated). To return to our lemonade example:

To find the mode, we list our values in ascending order:

occurs more often than any other number. Thus, our mode is

Median is More Resilient to Outliers

Finally, one property of the median is that it is "more resilient to outliers." What does this mean? First, let's be clear on what an outlier is: an outlier is a data value that is very far from many of the other observations. So suppose you have some data on how many days in a month it rains:

But one month, you have constant downpours and so you get

as a new observation. Your new data is:

is quite far from all of the other observations. If we were to graph this data on a boxplot: 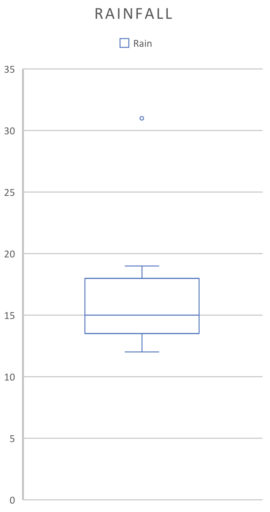 We would see that

sticks out like a sore thumb. That's how you know it is an outlier. (There are more precise definitions of an outlier, but you won't need them for the GRE).

Let's confirm that this is the case in our above example. To do so, we will compute the old mean/median, the new mean/median and compare them.

The old mean is:

The old median is:

The new mean is:

.
The new median is:

So we can see that the new mean is

higher than the old mean, whereas the median only increased by

. Thus, the median changed less than the mean did, exactly as predicted.

Why is the Median More Resilient?