What Affects Your Chances of Getting Into Law School?

What Affects Your Chances of Getting Into Law School?

It’s Largely About the Numbers

Law schools like to tout their holistic approach to admissions, which sounds reassuring and vaguely organic, and every part of your application really does matter. That said, your LSAT score and undergraduate GPA (UGPA) matter most. Why? Two reasons.

First, admissions officers want to gauge whether or not you’ll succeed in law school, and the combination of your LSAT score and UGPA turn out to be strong predictors of first-year law school grades.

Second, law schools care about their US News and World Report ranking, and USNWR puts a lot of weight on the numbers. A school’s LSAT median counts for 12.5% of its USNWR ranking. Its UGPA median counts for 10% of its USNWR ranking. If you have multiple LSAT scores, your top score counts most, because that’s the only score that gets baked into a law school’s reportable median.

What about everything else?

Although numbers count for more than any other factor, they aren’t everything. We’ve analyzed self-reported data from Law School Numbers to quantify the importance of timing, early decision applications, and demographics.

If there’s one takeaway from this post, it’s to apply as early as possible.

We can illustrate how much timing matters by looking at a hypothetical average application: a non-URM, non-international student with a 164 LSAT score and a 3.52 GPA applying in mid-December. Our model predicts that Emory Law would have accepted 50% of applicants with this profile in the 2018–2019 cycle if they applied in December. In other words, knowing nothing else about our average student, we’d expect her application to have a 50% chance of being accepted at Emory. 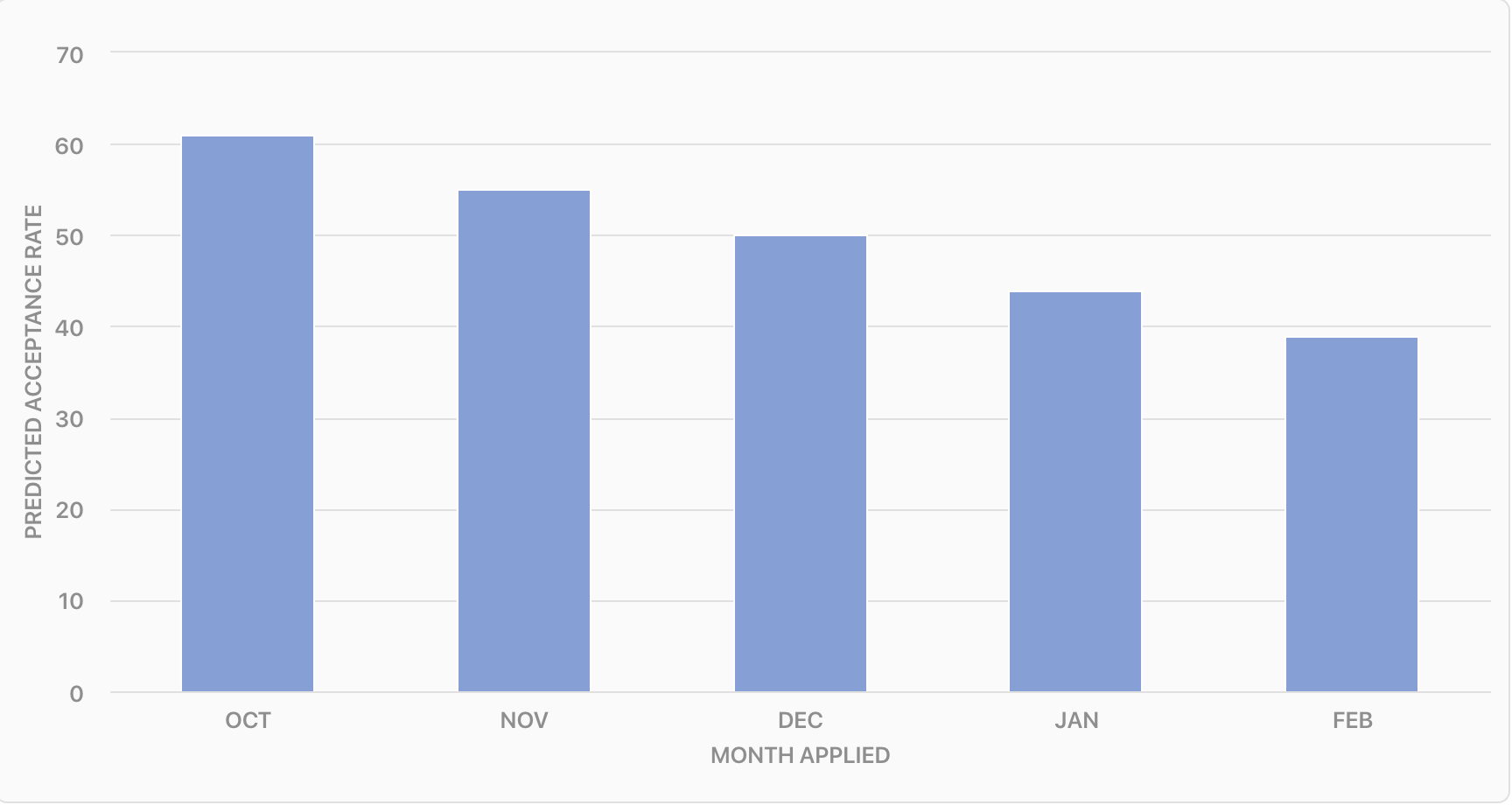 Note, though, that applying early matters much more if you are above at least one of the school's medians.

If you apply early decision (ED) to a school, you commit to attending if you get accepted. (See Should You Apply Early Decision?)

All else being equal, ED applications tend to be more successful than regular decision applications. This result is significant even after we control for LSAT score, GPA, timing, and so on.

If our hypothetical student (164 LSAT score, 3.52 GPA, non-URM, applying to Emory Law) had applied in November, she could have boosted her chance of acceptance by 10 percentage points—from 55% to 65%—by switching from regular decision to ED.

The closer you are to a 50% chance of getting into a given school, the more it will help you to apply ED. If you are very under- or over-qualified, applying ED will have a smaller effect on your acceptance rate. We won’t dive into the mathematics here, but the explanation for this phenomenon has to do with the shape of the logistic curve (which we use to model acceptances).

Strictly speaking, our model can never tell us that ED students did better because they applied ED. It’s possible, for instance, that ED students wrote better essays on average. But the relationship between ED applications and increased acceptances is strong enough that you should consider applying ED to one of your top-choice schools.

Being an under-represented minority (URM) helps you even more than applying ED. Our hypothetical student (164 LSAT score, 3.52 GPA, applying to Emory Law in mid-December) would have seen her expected acceptance rate improve from 50% to 77%—a 27 percentage point increase—if she were a URM.

Do some schools favor ED or URM applications more than others?

We don’t know, and the LSN data can’t tell us.

Some analyses of LSN data make claims like, “Emory is 614% more likely to accept ED students!” or “Columbia gives URMs a 6707% boost!” But we don’t have enough observations per school and cycle to make such claims. It’s a classic case of being fooled by randomness. Variations in small numbers cause the relative acceptance rates of ED and non-ED applicants to bounce around from year to year.

Any set of schools would suffice to illustrate this point, but here’s an example from Penn, which has among the most ED applicants in the LSN sample:

Note the small number of accepted ED students. Note also how the relative acceptance rates fluctuate from year to year. For example, in the 2016–2017 cycle, Penn accepted 45% of ED students versus 23% in the regular pool, but in the 2017–2018 cycle, Penn accepted only 10% of ED students versus 12% in the regular pool. Should we conclude that applying ED helped students at Penn one year but hurt them in the next? Of course not. All we can conclude is that Penn’s ED acceptance rate is sensitive to small differences in results because the sample size is small, and that we should refrain from making statistical conclusions about ED applications to Penn (or any school) in particular. We should only make conclusions about ED applications to law schools in the aggregate.

It’s possible that some schools do favor ED or URM applicants more than others, but we can’t say for sure, and neither can anyone else. Given how much ED helps overall, your best strategy is to apply ED if you can.

International students in the aggregate fare slightly worse in law school admissions than domestic students. The effect is comparable to the effect of applying regular decision versus ED. For example, our model predicts that a hypothetical average student (164 LSAT, 3.52 GPA, non-ED, non-URM) applying to Emory Law in mid-December would have been accepted 43% of the time if she were an American citizen versus 33% of the time if she were not, a gap of 10 percentage points.

International students may have a disadvantage because they’re international. Admissions officers may, for example, worry about international applicants’ ability to fund their education, and thus be more reluctant to admit them. It’s just as likely that international applicants underperform domestic applicants because they tend to submit weaker applications. Students who speak English as a second language, for example, may have trouble with their essays, and they may get extra scrutiny. (Admissions officers sometimes read the LSAT writing samples of ESL students to make sure that their personal statements match their writing abilities.)

Note that international students who went to college in America probably fare better than international applicants without an American GPA.

Undergraduate Institution and Difficulty of Major

What About Essays, Résumés, and Recommendations?

Our model performs at 80% accuracy on out-of-sample data, which suggests that the factors it can’t “see”—namely, essays, résumés, and letters of recommendation—matter a lot. Although it’s silly to say that these qualitative components account for exactly 20% of admissions outcomes (there’s a certain amount of randomness involved), the 80/20 rule accords with our experience. Law school admissions is about 80% quantitative and 20% qualitative. This helps to explain why applicants with very similar scores and grades often have very different results. It also helps to explain why law schools hire admissions officers in the first place. If these decisions could be made by a computer, they probably would be.

If you fall into the middle, your essays and recommendations are your chance to distinguish yourself. How else is Emory Law to pick from among all those hypothetical average applicants? Good “soft factors” could determine whether a candidate with a 164 LSAT score and a 3.52 GPA is among the 50% of numerically similar candidates who get accepted.

The source for our analysis is Law School Numbers (LSN), a database of user-reported admissions results. Although LSN has a large dataset, it's possible that the data is skewed. For example, users may be more likely to report acceptances than to report rejections. This wouldn't invalidate our analysis of trends—we could still conclude that applying earlier leads to better results—but it might mean our raw predictions are off.

In particular, our model may be overpredictive if you are just below both of a school's medians (LSAT and GPA). Why? Because these medians shift from year to year, and our model looks at over ten years of data. There is, however, a big difference between hitting a school's median and missing it, even if you only miss by one point.

Look back one more time at our hypothetical average student with a 164/3.52. Emory's LSAT medians for the first-year 2018 class were 165 and 3.79, respectively. If Emory sets an LSAT/GPA target of 165/3.79 for its next class, then we would expect our average student (who is below both medians) to get waitlisted or rejected, notwithstanding the model's predictions.

A Note on Our Method

We ran a logistic regression on LSN data. In essence, we defined a mathematical function that expresses the application result—admitted or rejected—as a function of the other LSN variables. (Specifically, we model the “logit,” or the logarithm of the odds, as a linear function.) Then we used a computer program to solve for the coefficients that best fit the data. The “best-fit” coefficients give us an estimate of which variables matter and how much they matter.

And now, the tool you’ve been waiting for…a predictor built on our findings:

Use your highest LSAT score and your cumulative undergraduate GPA according to LSAC*. Select the month you expect to apply. You can use the filter box to search for a school, click a column heading to sort your results, or hover over your estimated chances to see a tooltip of your admission probabilities by month.

If you haven’t yet submitted your transcripts to LSAC, use your cumulative GPA according to your undergraduate institution or estimate your LSAC GPA.

*To find your cumulative GPA, log into LSAC, then click this link: https://os.lsac.org/Apply/Transcripts/AcademicSummary.aspx. Scroll to the bottom of your Academic Summary, where you’ll find a section labeled “SUMMARY,” and read your “Cumulative GPA.”

Our data is self-reported and may be biased. We recommend that you use our predictions as one reference point, not the final word.

Preparing for the LSAT? Applying to Law School?

📌More on the admissions process: