How to Weaken LSAT Arguments

To weaken any argument on the LSAT's Logical Reasoning section, you have to understand one thing.

This thing is not tangible nor obvious. It’s instead abstract and subtle – which means it’s hard to understand. Here it is: You have to take away the support. What support? The support that the premises give to the conclusion. Please read that again. It may sound very obvious, but you’d be surprised at how often you will fall prey because you didn’t heed this warning. It’s only nature since our instinct when arguing is to deny our opponents’ premises. He asserts that there are bugs in the kitchen and therefore an exterminator visit is in order. You deny his premise by asserting that there are no bugs in the kitchen. But what would be the point of asking a question like this? All you did was to say “no.” Much more interesting is it to concede to your opponent her premises and then try to argue that despite your concession, her conclusion still doesn’t follow from her premises. That’s what Weaken (weakening) questions test you on. It most certainly does not say that you are to contradict, attack or weaken a premise nor does it ask you to contradict, attack or weaken the conclusion. It says you are to deprive the support that the premises give to the conclusion, as if with magic. Let me illustrate. Did you watch Dragon Ball Z growing up? Remember Goku’s Kamehameha? 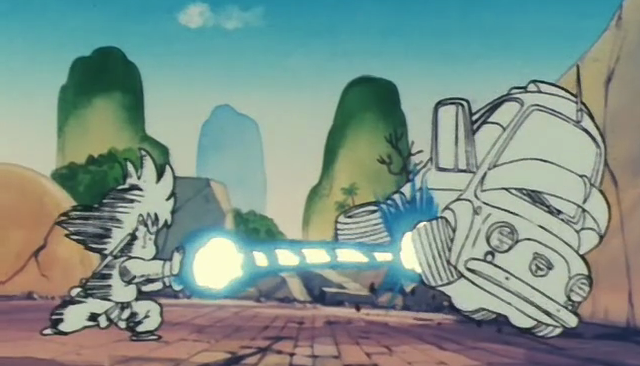 Now pretend that little Goku is the premise and that car is the conclusion. The Kamehameha beam (i.e., the blue beam) is the “support.” The thicker the beam, the stronger the support and therefore, the stronger the argument. Think about it like that. Accordingly, when you are asked to weaken an argument, you are asked to thin out the beam. But you can’t touch Goku, nor can you touch the car. Often, you have to fight your urge to attack the premise or attack the conclusion. You have to find something that thins out the Kamehameha beam. You have to find an answer choice that strips the existing premises of its supportive power. Don’t confuse that with attacking the premises. You are not attacking the premises. You are demonstrating, with the correct answer choice, that despite the premises being true, it adds nothing to the likelihood that the conclusion is also true.